Featured in the Vancouver Business Journal on September 11, 2009. Click image for full artical. 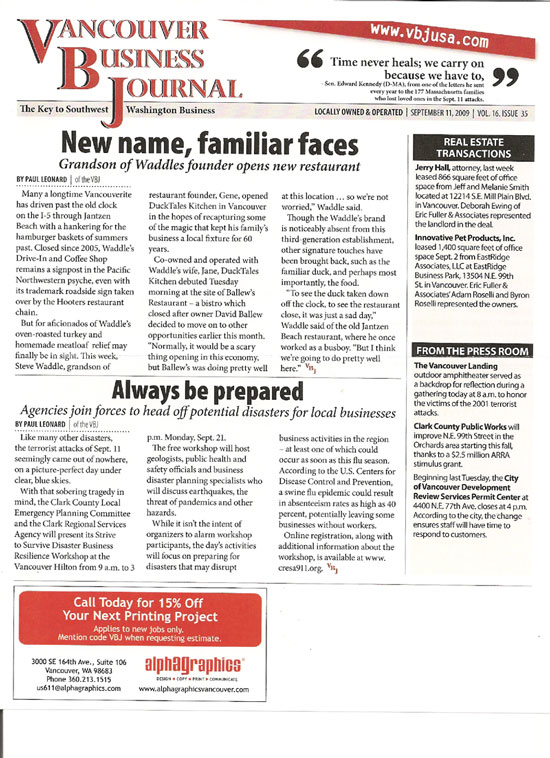 END_OF_DOCUMENT_TOKEN_TO_BE_REPLACED

This article reprinted with permission Courtesy of DailyInsider.com 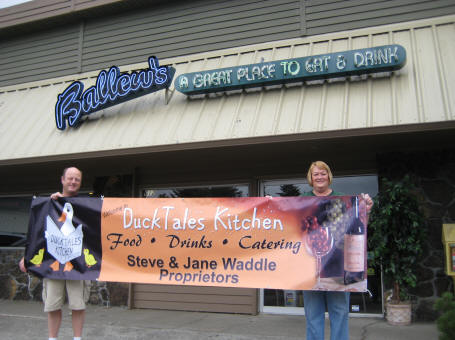 Should you stop by Ballew’s Restaurant in Vancouver’s Heights area this week you may just ask that same question. Over the next few days a transformation of sorts will take place at this great place for food and drink. David Ballew, owner of Ballew’s Restaurant, is moving on to other adventures while Steven and Jane Waddle move in with DuckTales Kitchen. On Wednesday, Sept. 9, DuckTales Kitchen opens for business.

Ballew’s Restaurant opened at this location in 1996. Since that time it has become a traditional meeting and eating place on the east side of town, one well known for its fresh cuisine, simple menu, and fantastic happy hour.

“I don’t know where my next pay check will come from, “David says,” so until then I might do a little traveling. What the heck, no job, no kids, nothing to tie me down right now.” David also has an enormous amount of gratitude when it comes to the thirteen years he has been at this location. “I thank everyone in the neighborhood and the community for supporting Ballew’s Restaurant.”

By the way, Steven Waddle is the kid who bused the carhop trays at Waddle’s Drive-In Coffee Shop, his father’s restaurant, at Jantzen Beach. After that closed, he continued as general manager for Applewood NW Cuisine & Catering the past seven years. Jane, whom Steve calls “the driving force,” brings many years of experience in the restaurant business, along with sales and marketing experience. Jason Forster will be on board as chef and kitchen manager. Jason, who is Steve’s son-in-law, graduated from Western Culinary Institute and, following a stint at the Hotel Coronado in San Diego, California, worked with Steve at Applewood.

While there are changes in store over time with new menu items and catering to be added, some things will remain the same. The great staff of Ballew’s Restaurant will stay. This includes Lisa Laurance, who has been at Ballew’s for twelve and a half years. David makes clear that “Ballew’s wouldn’t have been the success it is without the staff. Lisa was always the boss.” Hours of operation and phone are the same: 11 a.m.-8 p.m. Monday through Friday; noon -8 p.m., Saturdays; closed on Sundays.

Yes, the name DuckTales Kitchen plays on the locally famous duck that sat atop Waddle’s Drive-In sign. Stop by next week and say hello; Steven and Jane look forward to hearing some of your favorite duck tales.

For further information or a sneak peak at the menu, visit www.ducktaleskitchen.com. To contact Steven or Jane Waddle, call 735-7932 or email waddleitbe@ducktales kitchen.com.

Waddle family cooks at Duck Tales
By Karen Persson
for The Columbian
Why: Steve and Jane Waddle are beginning a new chapter in the Waddle family restaurant tradition with the recent opening of Duck Tales Kitchen in Vancouver. 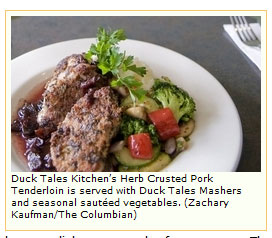 The family built its reputation with the landmark Waddle’s Restaurant at Jantzen Beach, and Steve and Jane say they’re committed to giving diners the same quality experience Steve’s grandparents delivered at Waddle’s.

Fresh ingredients are at the core of every made-from-scratch dish on the Duck Tales’ menu. The Fish Tacos, which are among the happy hour specials, and the Lobster Bisque are two points of pride for the restaurateurs. The Duck Tales Mashers, mashed potatoes flavored with sautéed scallions and a hint of horseradish, are popular for a reason. They’re just as good on their own as they are accompanying one of the dinner entrees.

Atmosphere: The whole family will be comfortable at Duck Tales, yet if you want to leave the kids at home, this is a nice place for date night, too. Housed in the former Ballew’s restaurant location, Duck Tales Kitchen has effectively redecorated to make its own dining statement with updated surfaces, new furniture and fresh paint.

The restaurant is essentially laid out like a diner, but it’s more upscale than that. Individual Italian glass votives in an array of colors bring a romantic glow to tables in the evening and watercolor paintings by a local artist adorn the walls.

What I tried: On my dinner visit I sampled the Fish Tacos, which were accompanied by a small ramekin of black beans seasoned with garlic as well as bits of fresh carrot and onion. I also tried the Duck Tales Mashers topped with crisp bacon pieces, the Lobster Bisque and the Herb Crusted Pork Tenderloin. For dessert, I sampled the Carrot Cake, the Crème Brulée with Orange Shortbread Cookies and Fresh Apple Pie.

The Fish Tacos are made with marinated fresh Mahi Mahi, Asian Slaw and a Sour Cream Cilantro Dressing in a soft corn tortilla. The fish is perfectly cooked to a moist, soft texture. None of the ingredients stand out on their own. Instead, they combine to create a fresh-from-the-garden flavor, which is perfect for reminiscing about the past summer.

The rest of my meal presented me with a combination of tantalizing flavors. The pork was cut into four medallions. Each was expertly breaded, with a flavorful herb-sprinkled crust, which was fried to a golden brown and complemented the tender, juicy meat inside. The medallions were drizzled with a lightly sweet port sauce and topped with chewy dried cherries, which added a touch of gourmet refinement. The vegetables that accompanied this dish were a medley of red and green bell peppers, broccoli and mushrooms sautéed to a soft, crisp texture with a touch of appetizing browning on some of the edges. They were generously peppered and matched the strong impression of the pork without competing.

The Lobster Bisque was smooth and creamy with lobster bits mixed in and created an overall impression of lobster without being overwhelming or excessively rich, which can sometimes be the case with bisque.

Finally, the Duck Tales Mashers were a standout. Combining the potatoes with scallions and just a hint of horseradish creates a unique, inviting flavor that even those who are not fond of horseradish will likely find enticing.

The desserts were basic and fresh. None was intensely flavored. The carrot cake was my favorite, though it was very simple. The ingredients didn’t include the usual raisins or nuts, but it was a nice finish to my meal.

Menu highlights beyond what I tried: Other than the Lobster Bisque, which is always available, Duck Tales offers a soup of the day from a list that includes Creamy Chicken and Rice, Potato Leek, Beef Vegetable and Tomato Basil Gorganzola. For lunch, Jane’s Traditional “Cobb Salad” is made with romaine lettuce, hard-boiled eggs, grilled chicken, bacon, avocado, bleu cheese crumbles and a choice of dressing. The Mighty “Duck Tales” Burger is topped with Tillamook cheddar cheese, grilled ham, a fried egg and grilled onions in addition to all the traditional burger trimmings. Deli sandwiches come in a wide variety and among the pasta dishes is the “Duck Tales” Homemade Macaroni & Cheese with diced ham. The restaurant roasts turkey in-house for turkey dishes and makes its meatloaf from scratch. Kids, endearingly referred to as Ducklings, may choose from a grilled cheese sandwich, Chicken Strips & Fries, Two Slider Burgers or macaroni and cheese.

Other observations: Jane Waddle was busy meeting and greeting diners during my visit. She made three trips to my table, which was a nice touch and contributed to the fine-dining atmosphere.

Health score: Duck Tales Kitchen passed its pre-opening inspection, but has not yet been inspected to receive a health score. Zero is a perfect score, and Clark County Public Health closes restaurants that score 100 or higher. For information, call 360-397-8428.